Drawing A Line Under The Amber Trail

I haven’t posted to this site in a while, so I figure I’m overdue for an entry. Otherwise I fear visitors may pop in, see the site covered in digital cobwebs, and figure I’ve given up writing altogether. So if by chance anyone is wondering – no I haven’t pulled the pin. I’m still collecting words on a couple of stories… although unfortunately kinda slowly.

2016 has been busy. We’re building a house at the moment, home-life with the kids is hectic, and in my real job I’ve been moved to a new site where I have more work to do than I can fit in the day. More significantly though I have to drive there – so I’ve lost my bus commute where I previously got most of my writing done.

But I’m not here to make excuses. I’ve bought dictation software and I’m trying to use it while I drive. I feel like an idiot as I talk to myself behind the wheel, and the words aren’t flowing as well as when I type, but hey, no excuses…(well, not many anyway).

So the launch of The Amber Trail has come and gone, and in the eight months that have zipped past since then I’ve had a chance to stop and put the experience into perspective.
Pushing the book out into public view was an exciting yet vulnerable experience. As I finished editing I could almost quote the story by heart, and I’d lost all concept on its quality. Would readers understand what I was trying to say? Would I cop snickering ridicule at work? Or would the book just be ignored?

I’d had a few close friends and relatives give opinions on the story, but I didn’t trust them to be honest or objective. Reviews from strangers were an unknown and terrifying quantity. When the first Goodreads review came in I was so curious to know if it was truly unbiased that I messaged the reviewer and asked if they knew me. They didn’t, but I cringe thinking back to that message now.

Since then The Amber Trail has picked up a modest chunk of reviews on Amazon and Goodreads, which is awesome. Most are positive. Some sit on the fence. Some criticise. That’s okay.

And new reviews are popping up all the time. To this day, seeing a new review means just a much to me as the first one did. So if you have reviewed the story, thanks heaps. Reviews really help with my motivation to keep going. They help me push through the tough days when I feel like avoiding publication altogether in order to avoid the potential ridicule and self doubt.

But, even on those tough days I’m still left with one basic fact: I like writing fiction. I like the process of slowly chipping away at a story and watching it build into something big. I like the moments where I have a vague concept outline floating around in my head – and after throwing down some stilted words, then deleting most of them, giving up, coming back, changing and reforming them, then blasting some words out in a flash of inspiration it’s suddenly pretty close to right. Those moments are gold. And they get captured on paper. Forever.

So I’m keeping at it.

But how long is the next book going to take? A while unfortunately. I’m about four chapters into one story and two chapters into another. But I’m excited about them both, which is a good thing. I think they can both be better than The Amber Trail if I give them the effort they deserve – but at this stage I’m guessing the next one won’t be ready for at least a year.

That’s not ideal, but at least I have time. I’m certainly not giving up the day job, so I don’t have any monetary pressures to finish. I have the freedom to make the books as good as they can be. The story arcs can mature in my head before the next chapter gets the call up to the crease.

Originally I figured I may be blogging on this site more often. That may come later. But at this stage, in order to give me as much time on the next story as possible, I’ve decided to concentrate any spare writing time into the next book.

So if this post is months old you’ll know why. I’m going to leave The Amber Trail to fend for itself till I get back. Hopefully it will continue bouncing around Goodreads and picking up readers. It’s kind of fun to watch.

In the meantime, if anyone wants to see where I’m up to, I’m going to update my monthly writing progress on the front page of this site. The main reason for doing this is I’m hoping it will rekindle my stubborn goal setting pride. As long as the progress is out there and visible, I’ll feel compelled to make it rise.

When the new book is done I’ll likely set it to free during the opening week in the hope of getting an early review boost. So if anyone wants to be sent a reminder to pick it up free at that time then leave your email here.

By then we’ll both have a few more wrinkles and grey hairs. Hopefully my gut won’t have expanded further. But that dull itch to keep collecting words will probably still be around.

I’ll hopefully talk to you then. I’m out of here for a while. 🙂

Posted on December 3, 2015 by M. J. Kelly
When I finished university, I took a final stand against the looming reality of full time work and spent six months backpacking solo through Asia while on my way to the UK to look for work. One of the first countries I arrived in was India, and I crossed the border as a naive and gullible twenty five year old with little travelling experience.
India is a country of extremes, and as a new backpacker it tackled me head on. The heat and humidity stifled me, the smells and noise were overwhelming, the scenery was awesome, and the people were always in my face asking me questions – with most motivated by an unreserved curiosity and pride in their country – but a smaller percentage, in the heavily touristed areas, motivated by a poverty driven need to relieve me from my cash in what ever way possible.
After about a month I ended up in Bangalore – a large, relatively modern city in the south. My guidebook stated that one of the local bars put on a laser show in the evening, so I headed down to have some dinner.
A local guy, in his early twenties, sat down beside me, and we got talking. His name was Raj, and he had travelled down from the north west of India on business. We had a few beers that night, and after meeting up again the next evening, he invited me to stay with him and his family before I left the country.
A week later I decided to take him up on his offer – and after a two day train ride north I arrived in Jamnagar, a small city that was close to the border with Pakistan. I tracked down Raj’s address and knocked on the front door of the small factory his family owned. He seemed happy to see me, and announced he was taking a few days off to show me around his town.
Over the next few days Raj put on an amazing welcome. We spent the days exploring the city on his motorbike; at night we would hang on a street corner with his friends, eat street food, chew tobacco and talk about girls (but from what I could see, never actually talked to any). I was dragged into weddings, taken dancing in nightclubs and taught the boys to dive at the local pool.
The trip to Jamnagar became my most memorable experience in India – beating out the big tourist attractions like the Taj Mahal or Varanasi, or the raw beauty of Hampi. The generosity that Raj and his friends showed me was a humbling example of who the Indian people are, and the memory has remained with me ever since.
My time in India seared such an impression on me that it became the setting for my novel – The Amber Trail. Not only that, I named one of the main characters in the book after my friend Raj.
I left India in 1999 with a resolve to pay Raj back one day – but I’m ashamed to say I never did. I settled into life in the UK, and without the social media options we use today, I never managed to keep in contact (hell, neither of us even owned a mobile phone!).
I’d love to let Raj know about the book, and the character I named after him, but all I have left these days is the address of his small factory, and one solitary photo, taken from a disposal camera, of the guys hanging on that street corner in Jamnagar in 1999: 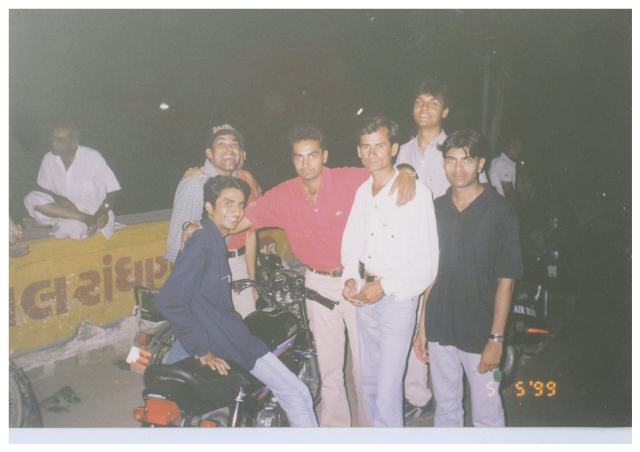 (Raj is the guy sitting on the motorbike in the front)
Over the last few months I’ve been trying to track Raj down, but while it seems his small brass products factory in Jamnagar still exists, I haven’t been able to find a contact email or phone number.
Can you help me find him? Do you live in India or know anyone who comes from Jamnagar? Do you know any of the guys in the photo? They were in their early twenties in 1999, so they should be around 40 years old today.
It’s time for me to pay him back for the generosity he showed me during my time in India. I want to invite him to visit me here – in Sydney, Australia – and I plan to give him to same welcome he showed me all those years ago!
MJK
July 2016 Edit: Still haven’t found Raj. Maybe one day. 😦
– What’s The Amber Trail about?
– Get your copy here
Posted in Uncategorized | Leave a comment
Loading Comments...